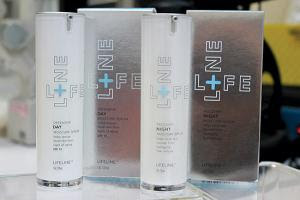 Women have been known to slather their faces with fruit, fish oil, foreskin (uh huh, the target of circumcision) and even the neurotoxin that causes botulism — all in the name of looking pretty. Now an Oceanside biotech has another novel ingredient for the aging-averse: stem cells from unfertilized human eggs.

“It’s not like a woman donated eggs in Encinitas and three months later it’s in someone’s skin in L.A.,” explains Brian Lundstrom, president of International Stem Cell Corporation (ISSC) in Oceanside, parent company of Lifeline Skin Care. It’s more like this: Women go to in-vitro fertilization clinics to get pregnant. There are often leftover eggs from that process. Researchers select stem cells, grow billions of them, and extract the bits that skin loves, such as growth factors — with permission from the donors, of course. Scientists then whip ’em up with antioxidants and sell the stuff in a slick plastic tube for about the cost of a month’s supply of Frappuccinos.

Is this a noncaffeinated fountain of youth? Ruslan Semechkin, the CEO of Lifeline and a biologist by training, says an eight-week study showed the day-and-night serum combo reduced the number and depth of wrinkles and made skin brighter, tighter and moister — though he wouldn’t say by how much. (Semechkin is 25, has the olive-tinged skin of a baby and admits a complexion of his variety doesn’t need this heavy hitter.)
Even in the stem cell world, youth is coveted. Lundstrom says stem cells taken from unfertilized eggs — the very seeds of life — are the youngest around and can become any cell in the human body. This is the first time such stem cell fragments have found their way into beauty cream, he explains. And because the eggs aren’t fertilized, they bypass the embryo controversy.

Someday, movement in the paralyzed and memory in the aged could be restored by using such cells; ISSC has already grown a human cornea that could cure blindness in people with eye damage. These breakthroughs may be dec­ades away, but ISSC’s “cosmeceuticals” are just the beginning. Profits from pocketbooks of the age-obsessed will fund the biotech’s research for other therapeutic drugs. So if you’re considering spending a small fortune to plump things up, you could call it a contribution to science.